The Unique History of Itō

Itō has been inhabited since the Jōmon period – roughly 13,000-300 B.C. This era coincides with the Stone Age. The hunter-gatherer Jōmon people are believed to have entered Japan via the Japan Sea and the northern archipelago. They occupied northeastern Japan, and Izu was at the far western boundaries of their range. Archaeological digs here in Itō have produced artifacts from that time including primitive tools and pottery.

The Yayoi period followed and was best known for 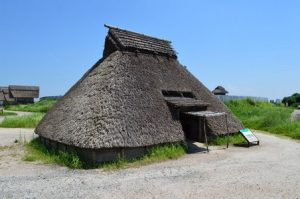 the first recorded interactions with China, Korea and  development of wet-rice cultivation.

The University of Pittsburgh has an easy to view timeline of Japanese history. Please click here to see it.

Prehistoric Japanese history does not provide much insight into what makes Izu unique. It is not until complex political systems and rivalries develop that we see historical figures of great importance. The most important political figure in Izu history is Japan’s first shogun: Yoritomo Minamoto.

Perhaps the most famous rivalry between political families in Japan was between the Taira and Minamoto clans during the Heian period, Japan’s classical golden age. The Taira were dominant during this time.

Yoritomo Minamoto’s father was executed after the Heiji Rebellion, but Yoritomo and his brother were spared. The ruler of the Taira, Taira no Kiyomori, banished 13 year old Yoritomo to Izu, and assigned a loyal local warlord to oversee his exile. That warlord was Sukechika Itō, whose family name remains as the name of Izu’s largest city.

Yoritomo Minamoto spent his youth planning his father’s revenge and eventually succeeded in 1185 by overthrowing the Taira clan in a decisive battle at Dan no ura. He then gave himself the title of Shogun, conqueror of all barbarians.

Itō is also famous for a later shogun, perhaps the most famous of all in Japan: Tokugawa Ieyasu. He was the first ruler to successfully unite all of Japan.

Never mentioned in the novel or TV series was the fact that when Tokugawa Ieyasu ordered William Adams (Blackthorne in the novel/TV show) to build Japan’s first Western ship, the construction took place here in Itō.