Some facts about Mt. Ōmuro, the most famous volcano in Izu

I live in Ito, the most populous city on the Izu peninsula. The most defining geographical feature of Ito, is Ōmuro Mountain, a dormant volcano.

Local geologists describe Mt. Ōmuro as a scoria cone volcano – aka a cinder cone. “Cinder cones are the most common type of volcano in the world. They are small in comparison to the other types of volcanoes. In fact, they’re only tens to hundreds of meters in size. But at the same time, they’re very steep typically with a bowl-shaped crater at the summit.” (EarthHow.com) 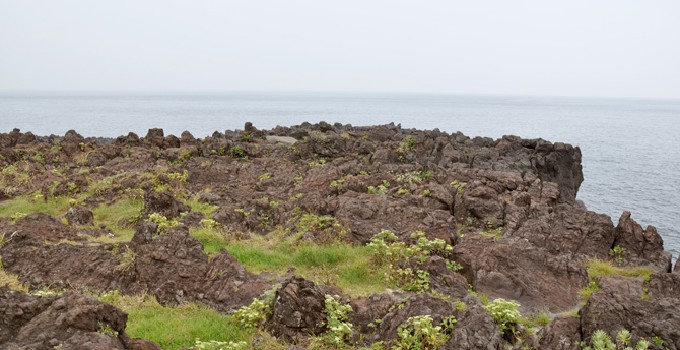 Everywhere you go around Ito, you see scoria that came from Mt. Ōmuro. 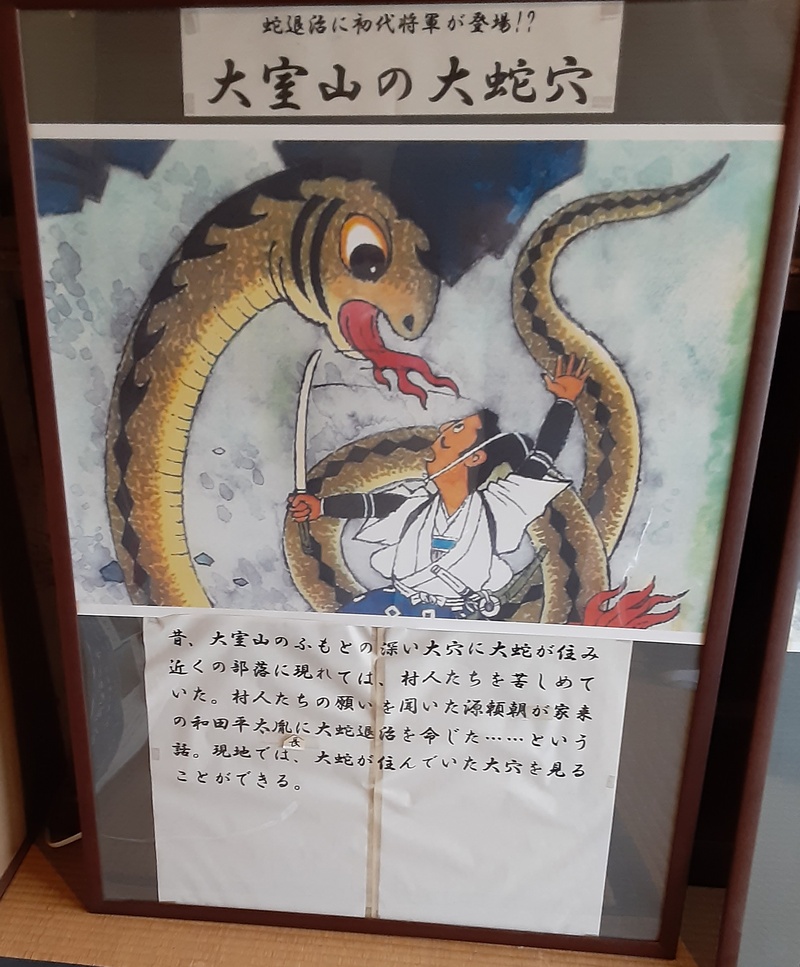 Yorie Minamoto, Japan’s second shogun, often visited Izu. After a bountiful day of hunting, he was in a good mood. Seeing this, the villagers implored him to kill the daija. Yorie Minamoto sent Heita Wada, his best guard to slay the beast.

Wada cut off the head and took it to his lord, who expressed his great satisfaction and appreciation.

Yorie Minamoto ruled as Shogun from only 1202-03. He was assassinated at his villa in Shuzenji, in western Izu.

During the Kanei era (1625-45), Lake Ippeki (north of Mt. Ōmuro) was called Big Pond. At the bottom of the pond lived a shape shifting dragon that often appeared as a red cow, and less frequently as a beautiful young maiden who lured young men near the pond where they were eaten!

The villagers beseeched the venerable Kazuhisa Hihiro, priest of the Koei Temple, to rescue them from the terrible red cow. Hihiro spent seven days and seven nights on a small island in the lake chanting Buddhist sutras until finally the menacing red cow was subdued.

A small hall was built on the island to house several volumes of the Lotus Sutra. To this day, the island is named Sutra Island. 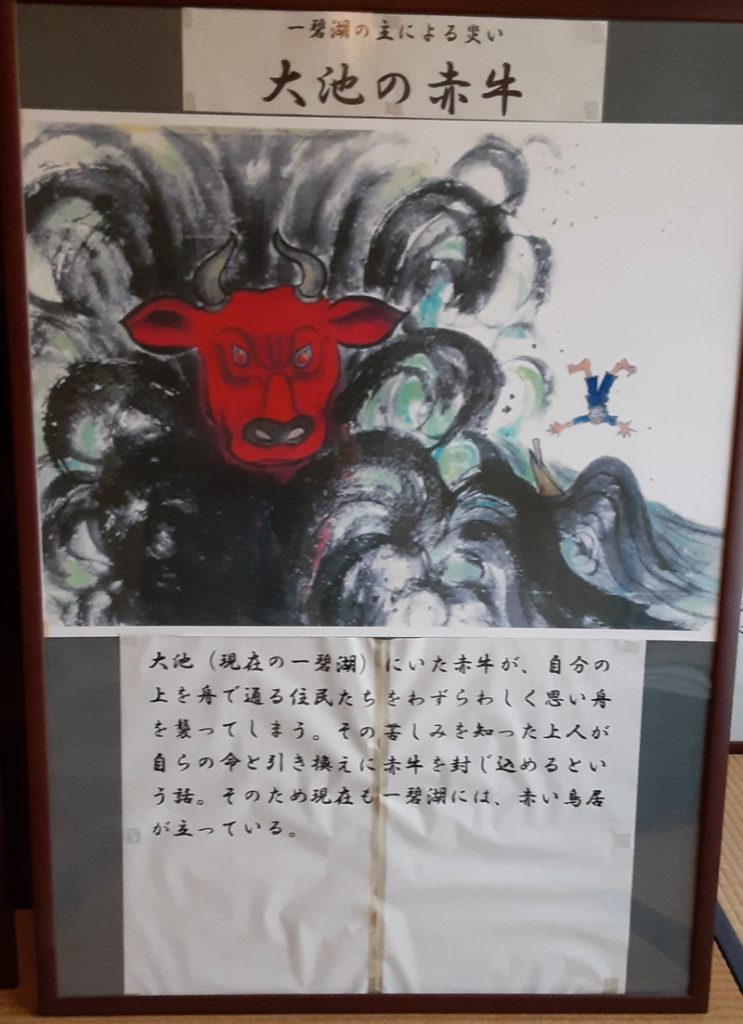 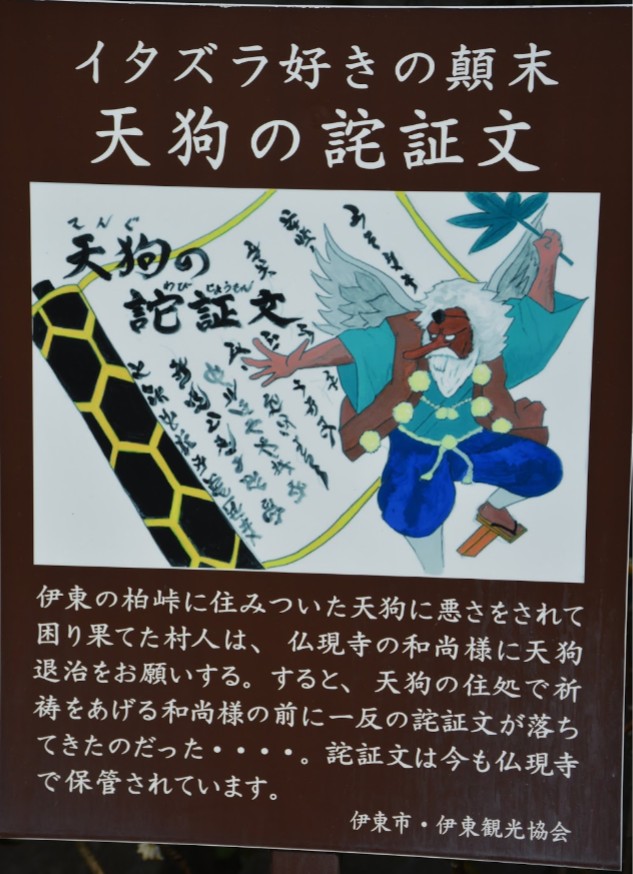 Behind Ito City Hall is the grand Butsugenji Temple. Housed inside is one of the greatest cryptographic mysteries of Japan: the Tengu’s Apology. A tengu is a very temperamental supernatural being that can be good or bad, but is mostly known for harassing people for his own pleasure.

Around the first year of Manji (1658) , a tengu appeared at the Kashiwa Pass in the Amagi mountains and began to regularly harass travelers. Butsugenji priest Hiyasu Shonin went alone to Kashiwa Pass to discipline the tengu. He grabbed the tengu’s nose with both hands and forcefully twisted it, which defeated it.

Priest Shonin made the tengu write an apology and promise not to harass travelers anymore. The written apology is kept at  Butsugenji Temple. The 178-line, 2900+ characters of the apology have never been deciphered. Even using the Jindai character theory, the spirit world character theory, and the esoteric scripture theory, the text remains a mystery.

In late winter, for more than 700 years, the annual yamayaki event takes place at Mt. Ōmuro. Yamayaki literally means “mountain burning.” The original purpose of the event was to produce high quality kaya (sedge grass) that was used for thatched roofs. Over the past 100 years, thatched roofs have virtually disappeared in Japan, but the tradition carries on as a tourism event. The entire mountain burns in about half an hour.

For more information about Mt. Ōmuro and the surrounding area, here are a few websites to visit:

omuroyama.com is only in Japanese, but you can paste the address into Google Translate and view the content.