After more than two years of pandemic restrictions, Japan is finally opening to international tourism . . . a little bit at a time. The most conservative predictions are that people will be able to freely visit Japan by the end of this year. If things go well, hopefully sooner.

“Hopefully” is not reliable enough information to book a trip. Until we hear otherwise, I recommend planning your next trip to Japan beginning in March of 2023, when next year’s hanami season (cherry blossom viewing) begins. If you can be flexible, please keep reading the news. Things can change quickly.

It has been lonely without being able to see visitors enjoy the sights, sounds, and tastes of Japan. We are all anxiously waiting to welcome you and share the charms of this amazing country!

If you can’t make these events, keep them on your radar for your next trip to Japan.

A summer event held on the Matsukawa River that flows through the center of Ito onsen town!

In this unique competition, participants navigate a large tarai (washtub), about 1 meter in diameter, using small oars shaped like a rice scoop to compete for the fastest speed. 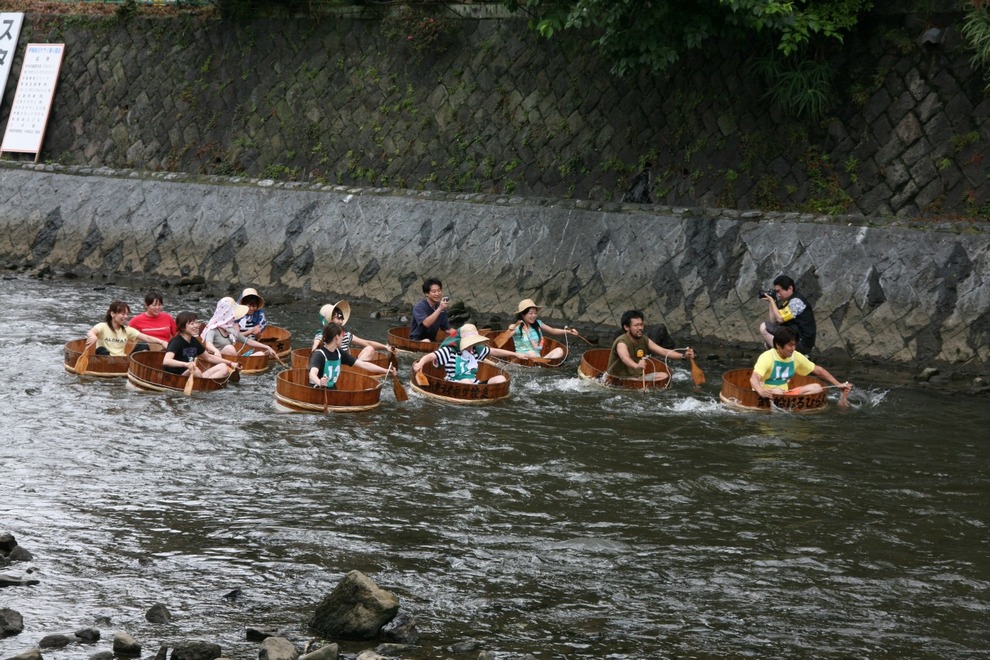 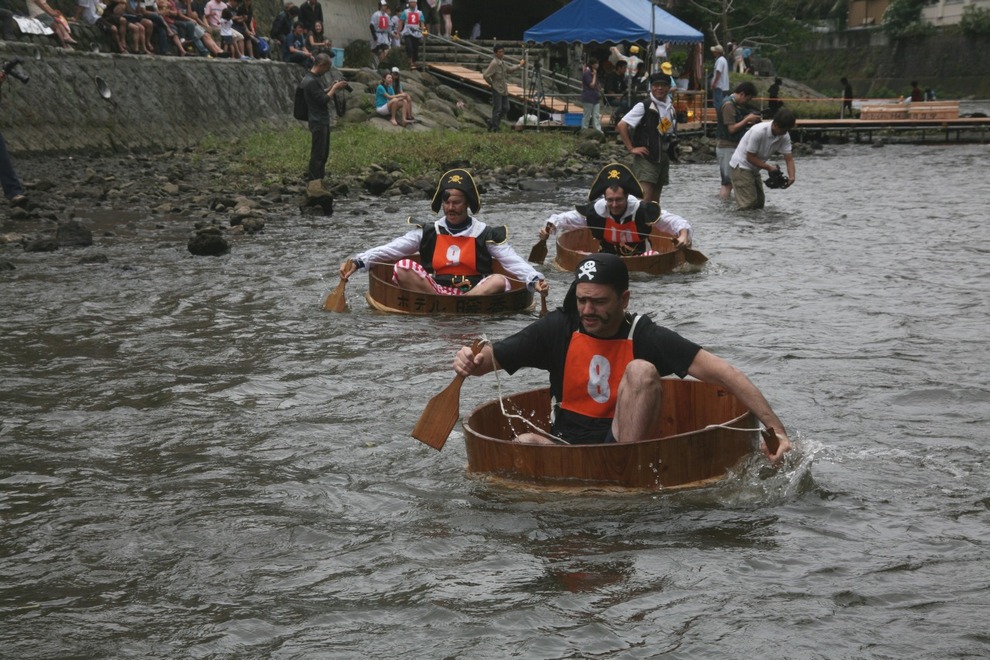 The course is 400 meters and starts at “Ideyu Bridge” in Ito’s onsen district. The finish line is near the “Matsukawa Fuji Hiroba” where the river flows into the Sagami Bay.

The Tarai Race has been a traditional event held in Ito since 1956.

Ito's biggest annual festival is back! 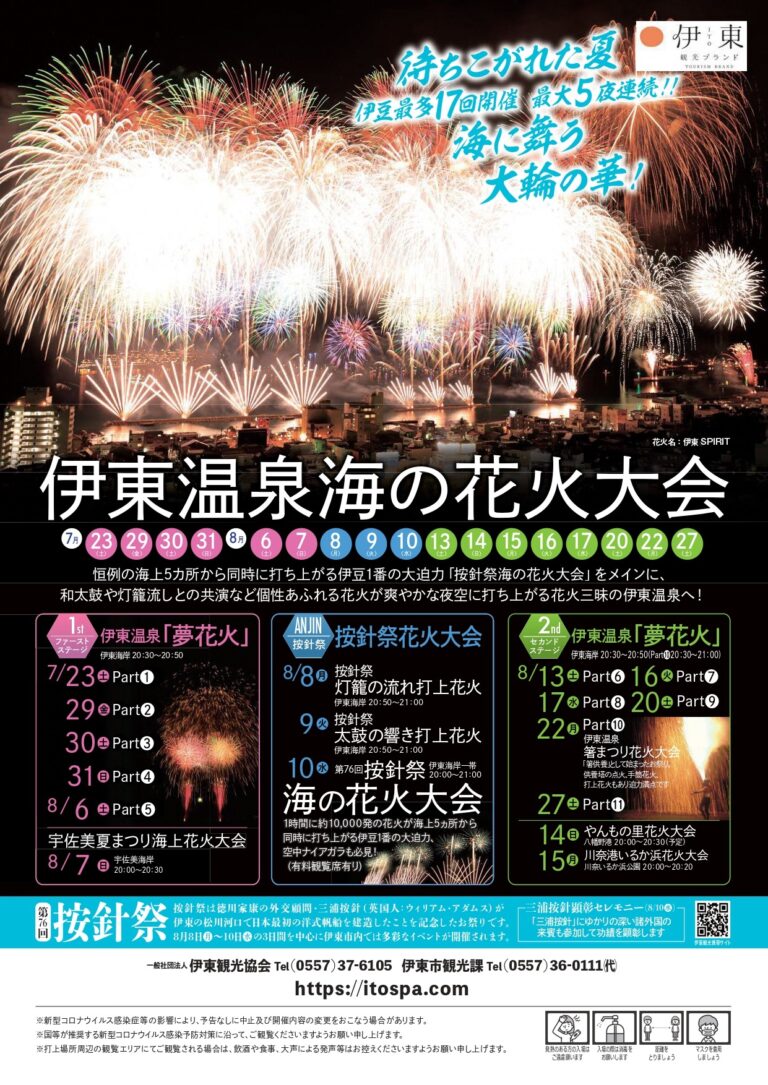 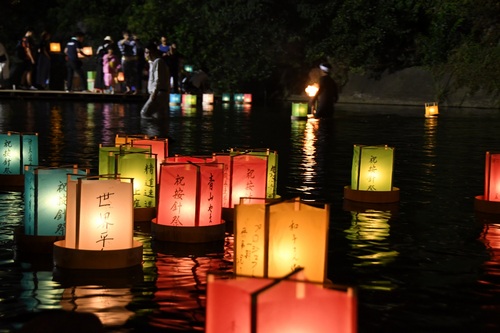 Venue: Matsukawa River (Tsugakubashi Bridge to the mouth of the river) 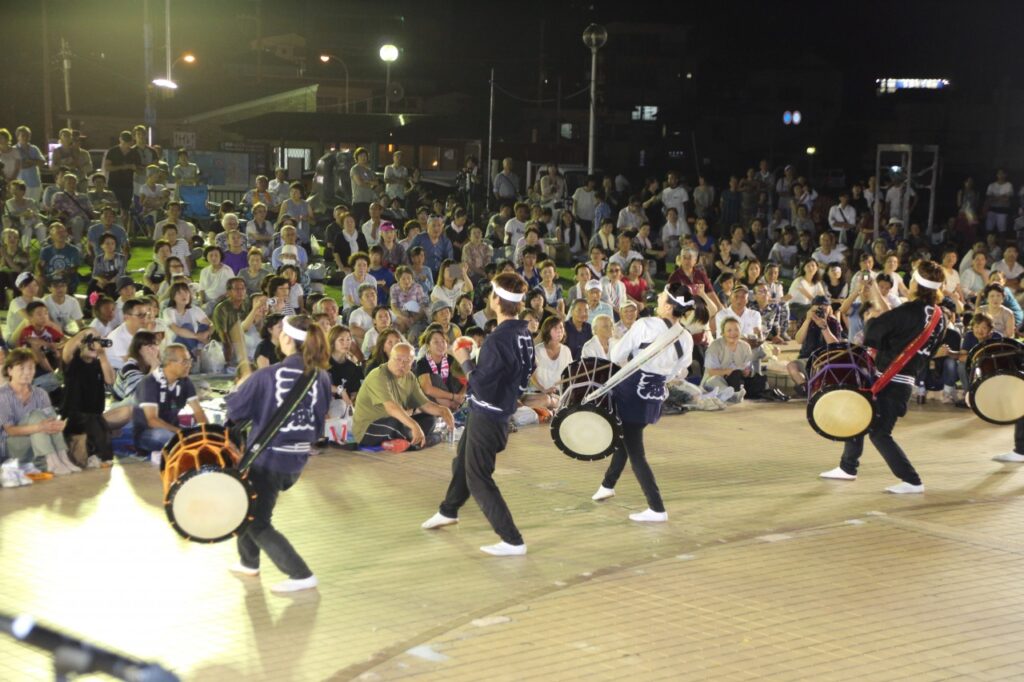 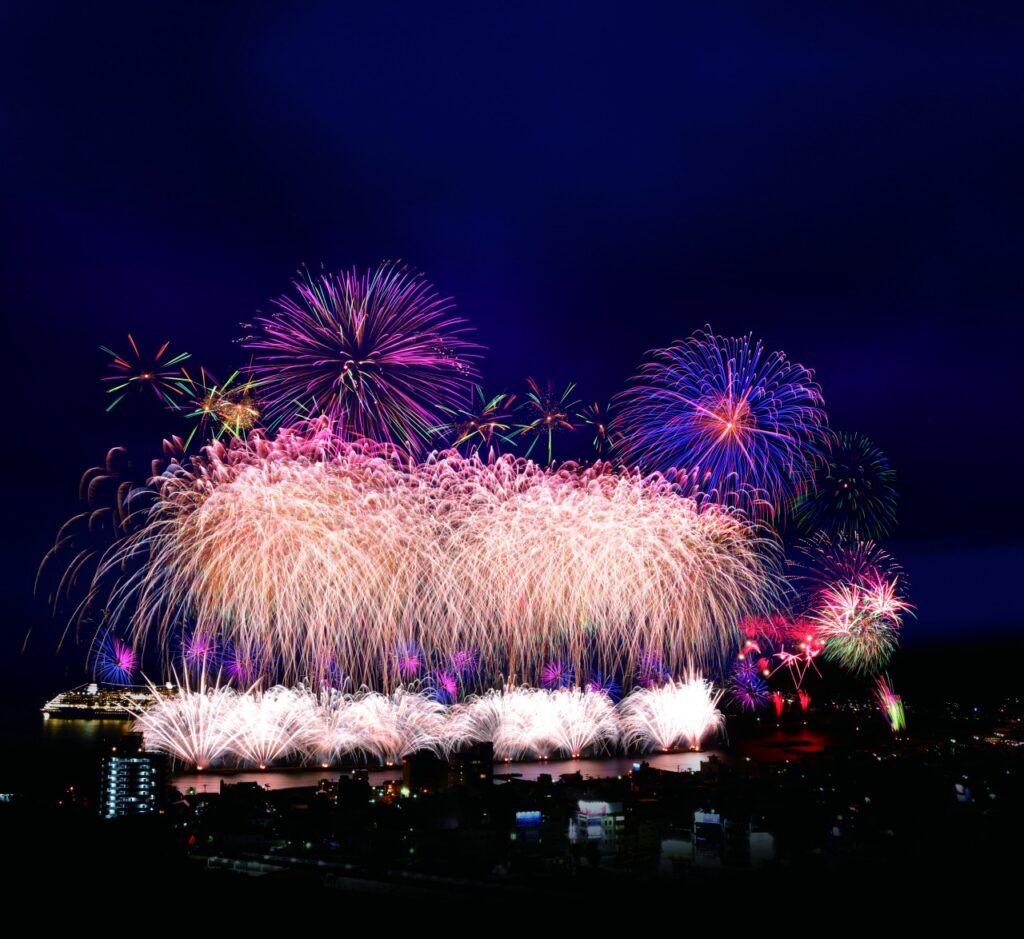 In addition to these major events, there will be smaller events, food booths, pop up markets, and much more throughout the downtown Ito area. This is the festival that local residents look forward to the most, so it’s a great opportunity to experience the character of Ito.

Currently at Lingua Franca/Jogasaki Culture Museum in Izu Kogen, it’s all about the South Pacific island of Tuvalu.

Born in Nara Prefecture, Matsui has lived in Izu for two years.

Asked about his connection to Tuvalu, he told me that he first wanted to visit after learning about it being threatened by rising sea levels. He wanted to see how serious the situation is and learn how local people are getting along.

“I visited three times. My first trip was for a month as a study abroad student during university. The second time was when I took a year off from university; I worked for half a year to save money, and I spent another half year as a student at University of South Pacific. My third trip was a two month stay with a Japan-Tuvalu exchange NPO.”

One of the things that captivates Matsui about Tuvalu people and their culture is that, “they live in harmony not only with their neighbors but with the whole community. They share everything. They also have a rich tradition of welcoming foreigners. I felt much love in Tuvalu and learned so much while I was there.”

When asked what Matsui hopes people will take away from his exhibit, he explained that the media focuses so much on Tuvalu’s plight as a victim of global warming and poverty. “Instead of a poor and pitiful situation, I found a culture of people living life to the fullest with smiles, love and an intimate relationship with their beautiful ocean.” 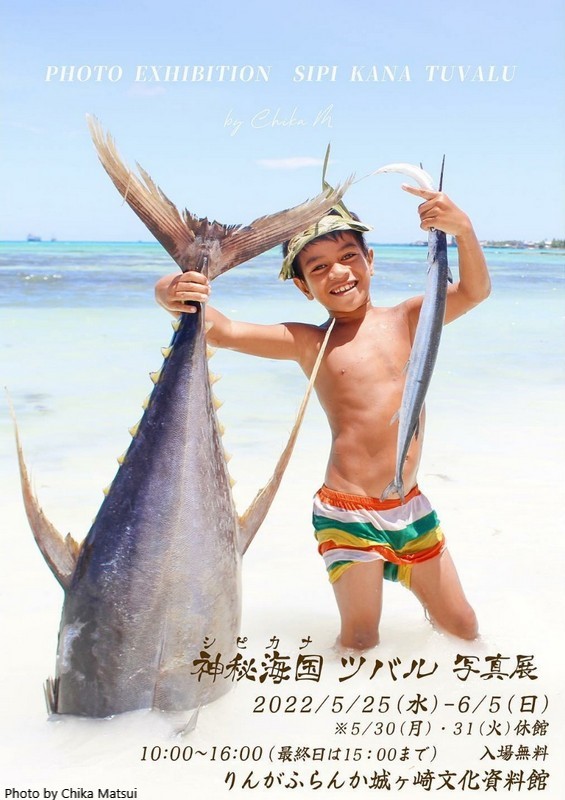 On Sunday, Lingua Franca will hold a craft/art market featuring items created by locals. It is rumored that you’ll be able to get your fortune told too!

With all this fun stuff going on, there’s no reason to be bored. There’s also a huge craft/art show (Sasarahosara) at Sakura no Sato, at the base of Mt. Omuro, so plan to visit Ito and Izu Kogen.

We’re waiting for you!

Art, crafts, music, dance and food! Sasara Hosara – takes place in the beautiful Sakura no Sato Park at the base of Ito City’s Mt. Omuro.

Sasara Hosara is an expression in the local Izu dialect that means “a messy and chaotic situation”. This event is chaotic in a fun way because it’s hard to keep track of all that it has to offer!

This long running event is held twice a year. 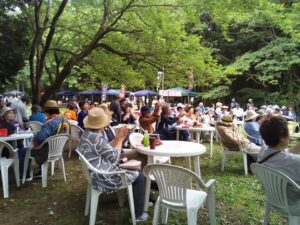 The festival takes place in the Ito City Teenager Campground across the road from Sakura no Sato at the foot of Mt. Omuro. 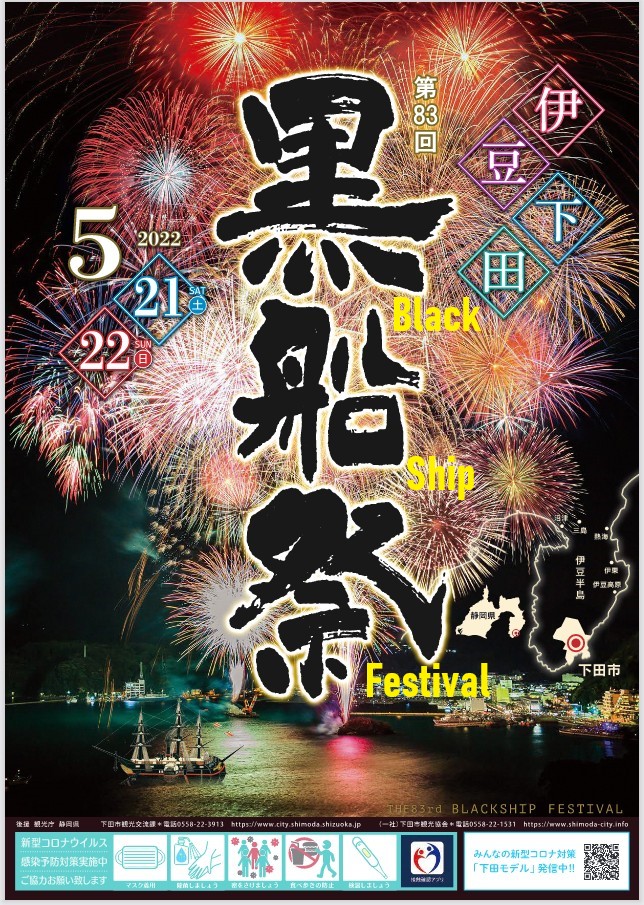 Shimoda’s most popular festival commemorates the opening of Japan by US Commodore Matthew Perry in 1852-54. Begun in 1934, this festival is put on by the City of Shimoda and the United States Navy. This year’s festival, the first since the COVID-19 pandemic began, will be scaled back to 2 days instead of 3, so please check the schedule of events.

The Sukechika Ito Festival celebrates the Heian era samurai who gave the city of Ito its name.

The highlight of the festival is a floating stage on Ito’s Matsukawa River, said to be the only stage of its kind in Japan. Here, in the stillness of the night, some of Japan’s top-ranked Noh performers perform Kyogen and Noh plays. It is a unique experience that invites the viewer into an ethereal world. 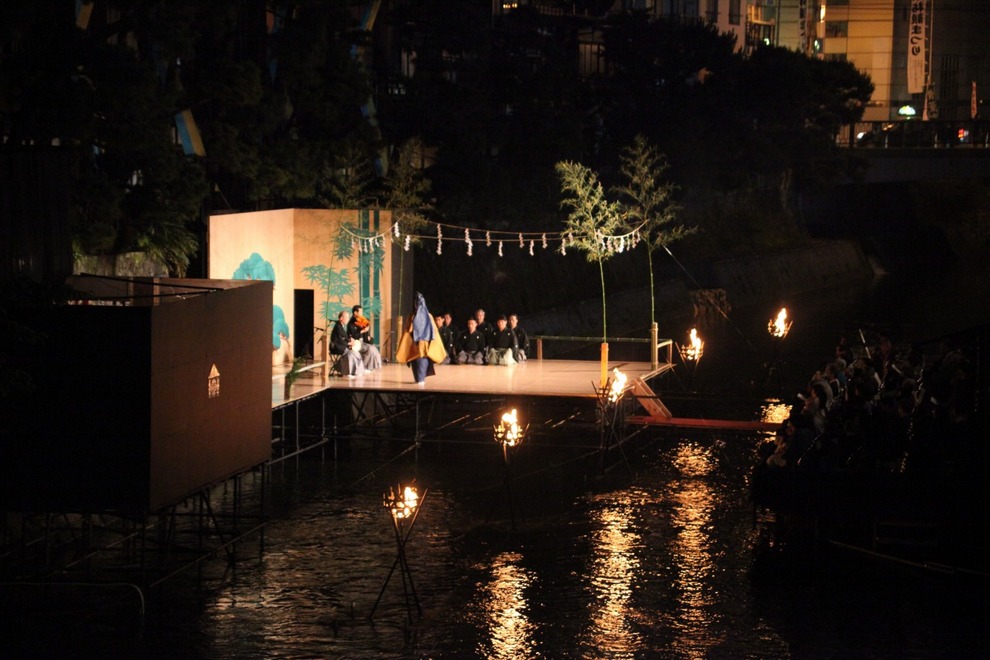 In addition to the floating stage, there will be many other performances, vendors, music, food and fun! 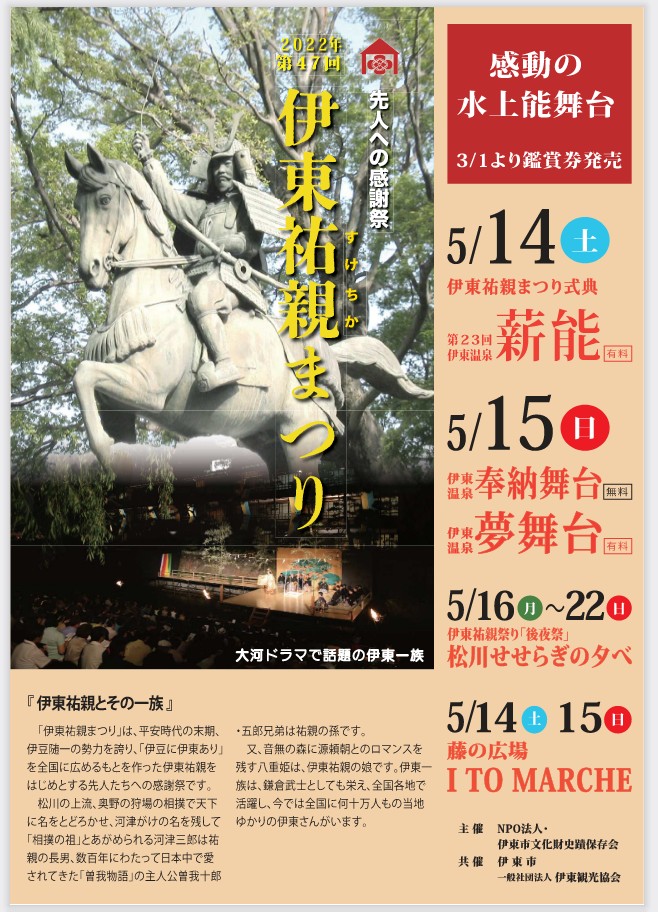 Location: Fuji Hiroba, where the Matsukawa River meets the ocean